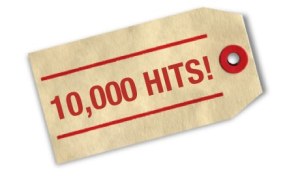 Some time today I got my 10,000th view. Now that is not much by any popular standard on the internet, but pretty pleasing to me. My daughter said that means there are 10,000 sad lonely gamers out there. She may have a point.

I started this back in January. My purpose was to make myself improve my painting output, and I hope, the quality of my painting. Paint something new and put it up. I had/have so many unpainted miniatures that I was starting to feel guilty about it.  Well the output side has improved.

As far as my Napoleonic forces go, since I started in January I have completed 3 British, 2 Spanish, 1 Bavarian and 1 Swiss infantry battalions, 1 4-gun French Foot battery, a regiment of Saxon Heavy Cavalry and two regiments of French chasseurs-a-cheval.  That is more Napoleonics than I had done in the previous ten years to be honest.   I have also re-based over twenty battalions of French and French allied Foot and seven cavalry regiments.

Of course, I am pretty sure that none of this would have happened without my muse, who never complains (too much) about my painting gear and models spread out all over the dining table.  To her I say I do love you.