Last year I brought a bunch of stuff off Wish and included in that lot was a couple of sets of paint brushes. I think the total cost of these brushes was about NZD$10.00. Normally I buy Games Workshop brushes but they are pushing $10 each now. I have tried $2 Shop (I guess Dollar Store or Pound Store to you Yanks and Poms) brushes with varying amounts of success and failure so was not holding out too much hope for these Wish brushes.

I have been pleasantly surprised. Already painted three units with the first of them and have had no problems.  For the price I am not too worried about how long they last but with normal maintenance I think they will surprise me. 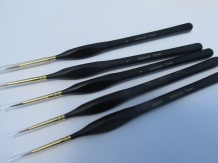 This morning while working on a unit of Spanish Line cavalry I wondered how many other regiments of cavalry I had sitting unpainted out in the cupboard in the Woolshed (not counting the one of Spanish Dragoons and Hussars in my study that I am doing over the next month).  Thought I would check out exactly what I had and start figuring out some sort of plan to get them painted. Then I began to wonder exactly how many unpainted Napoleonic miniatures I had. Turns out I have quite a lot. Probably only a lead molehill by comparison to some other gamers, but I don’t have to justify your lead mountain to SWMBO – just my own.

I started out looking at just the metals. Turns out I have quite a bit. Boxes and boxes.

I never actually knew that I had four French Cuirassier Regiments (two Front Rank, one Hinchliffe and one Connoisseur), two Carabineer regiments (Hinchliffe and Connoisseur), two Dragoon Regiments (mixture of Hinchliffe and Hinchliffe Foremost), another French Chasseur regiment, a Hussar regiment and two regiments of Polish lancers (mostly Hinchliffe).  I found six battalions of Front Rank Bavarians, some Hinchliffe Bavarian cavalry (2 regiments) and at least a couple more divisions of French infantry (various), at least three Guard battalions (Front Rank and Foundry),  a few artillery batteries and copious officer and general staff figures. I even found a unit of Scots Greys and a battalion of Foremost Highlanders in charging poses. I knew I had some Connoisseur Zastrow Cuirassiers somewhere and I found them too.

For some reason I have 24 Dutch Belgian Carabiniers. I have no idea how I came by them. I have never even wanted a Dutch-Belgian force. Likewise the dozen or so Dutch Belgians Chasseurs.  Maybe I got them second hand so I could use the horses.

Then there are War of 1812 British (Canadian Voltigeurs, Glengarry Light Infantry, three militia battalions, Light Dragoons and officers), Americans (Artillery batteries, Dragoons, Militia, a couple of regular battalions, officers and so forth) and a whole bunch of Indian allies for both sides.

I have not even started on the plastic stuff yet. Lots of Perry, Victrix and Warlord Games boxes. Or the Warhammer stuff (Fantasy Bretonnians, Dwarves, Orcs, High Elves and Space Marines), or the Dixon Samurai army, or finish off the boxes of Wild West/Apaches/7th Cavalry/Pirates, etc etc etc. Hell, I even found a box of Eureka Tekumel miniatures I got about seven years back and promptly forgot about and a box of GDW Traveller miniatures that I had not forgotten about – Imperial Marines, aliens and adventurers.

All I can say is that it is a good thing Winter is Coming. 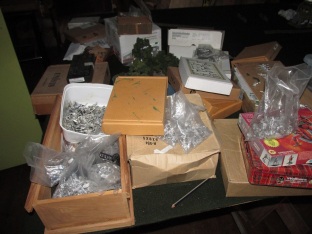 Plastics – lots of plastics. What the hell have I got two boxes of Warlord Games Russians for?

I am sure that I am not alone in having that feeling of expectation you have when you ordered something from overseas and then sit back to wait its arrival – this goes back to when I was a lad sending my £2 postal notes to Britain and waiting six months for the surface mail to arrive.  It is almost as much a part of the war-gaming hobby for me as actually painting and playing games.

So, it is Christmas time in July for me here at the Woolshed.  136 Zulus, 32 British and some special set/characters. My painting for the next month has been taken care of.

This was my first ever order from Black Tree Designs so I was a little apprehensive. However, I had emails when the order was received, picked and posted. Then I got updates with an ETA for the parcel that said 28th July. Low and behold – it arrived on the 28th July. 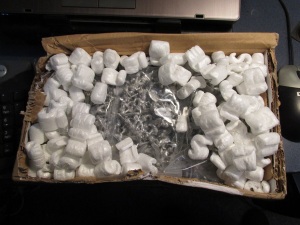 After reading about Wet Palettes I decided to knock one up and give it a go. I am rapt with the result. Paint stays wet, hardly any wastage, easy to mix colours. A few people on The Miniatures Page asked how I made it so here goes.  I made this one while waiting for the jug to boil so I am guessing it took about two minutes flat.

First off, I used a plain plastic deli container like this.

Two sheets of paper towel were folded up and wedged into the bottom of the container. Some people use sponges, but in this case I was using what I have. To get a sponge is an 80km round trip into town.  Continuing- I put in about two tablespoons of water to soak into the paper towel – use your judgement here. If it is not damp, then use more, if it is too wet – you have just wasted two paper kitchen towels.

I cut out a round of baking paper (also called cooking paper) and shoved that down on top. 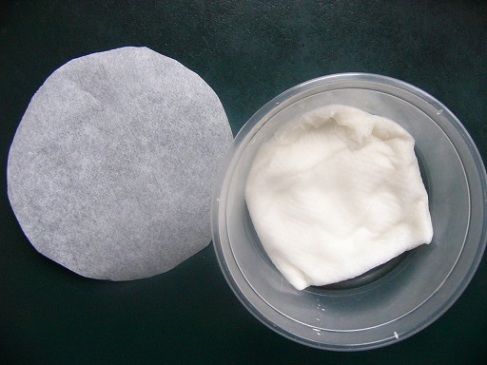 And there you have it. A wet palette. The one of the left I made two days ago and the paint is still not dry. 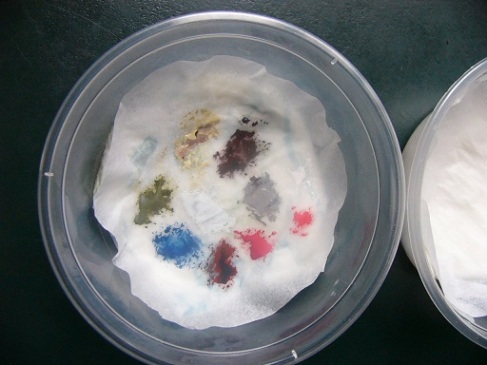 I can see how this will really help as the temperatures start to rise here at the Woolshed in summer.

Give it a go – you wont regret it.

Copyright 2019 - No part of this blog may be used without the permission of the artist.