I painted these really quickly from scratch last week while I was at work (well not exactly while at work but while I was away for work). I decided not to go as far as doing tribal tattoos and so forth – just wanted the unit on the table. I could go back and do them at some stage if I wanted I guess.  Figures are a mix of Games Workshop miniatures from about 4th to 6th edition as far as I am aware. 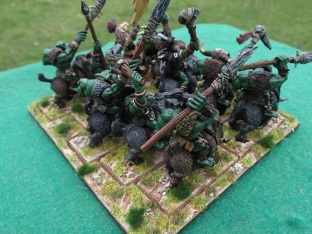 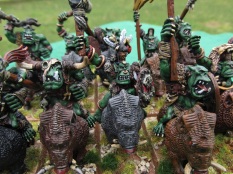 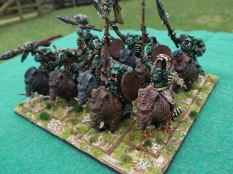 With the movement tray I wanted to stagger the position of the miniatures to give a more random look to a bunch of ranked figures. I did flirt with the idea of only using say six figures and making a single based “regiment”. But that would have entailed cutting the boars off their mounting slot thingies and frankly I couldn’t gather the enthusiasm. Kings of War has no issue with whether the full ten figures that make up a regiment are actually on the base as long as the minimum are there – in this case it would be six figures. The footprint of the base is what is important.

And lastly, I knocked up a movement tray for the unit of Boar (Gore) Riders I did a few weeks back.