Seeing as how much I hate cavalry I really seem to be painting a lot of them at the moment.  My latest unit I am working on is a regiment of Spanish Cuirassiers. Now these are a bit later than my 1808 Spanish army by a few years but I had these Perry Plastic Cuirassiers and did not need them as French (have four metal regiments as yet unpainted for my French army), so decided to do them as Spaniards. I am not sure how many men the Spanish actually outfitted in captured French kit but thought that they looked neat – which was enough for me. 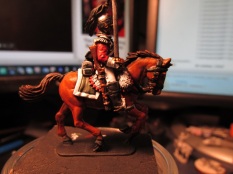