On Thursday 15th May, 2014 my father, for whom I am named, finally marched off parade and into the memories of those who knew him. He was in his 90th year. He was a veteran of World War Two, a conflict that shaped him and affected every day of his life from when he was sixteen and joined up (after lying about his age) until the day he died.

He started his military life in 1940 as a Trooper/Bandsman in the Queen Alexandra’s Own Wellington West Coast Mounted Rifles. They actually rode horses and practiced cavalry charges with lance and sabre.

He transferred to the Coastal Artillery and was stationed at the forts covering Wellington Harbour. He operated the mechanical range finding calculator to feed targeting information to the big guns. The Range Finger shoulder flashes below are rare as hen’s teeth. I have been looking for another set for years with no success. Rather glad that Dad managed to keep these items.

In 1942 he transferred to the Infantry and first went to Egypt for training and was posted to 22 Battalion, 2NZEF as a replacement. His first taste of action was in Italy in 1943 at Monte Cassino, a hell of a baptism of fire. He spoke of the horror of experiencing combat in such a nightmare place, and how he quickly learned to respect the enemy he was fighting.

My father was a natural soldier. He fought throughout the rest of the Italian Campaign. Like most New Zealanders of the time he was used to living rough and was able to make-do with what he had on hand.  For the most part he enjoyed soldiering. He was awarded the Military Medal for bravery. This is a copy of the original citation document held in the War Office Archives in the UK. The original presentation certificate signed by the King was lost to a fire. He said that he must have been shell shocked because no sane person would ever have done what he did.  Self-deprecation is the way of Gallantry Award winners it seems. He always said that he didn’t deserve his medal and better men did. In latter years he spoke of this award with a mixture of pride and embarrassment.

He never actually received his medal until about 1950 when his old Divisional Commander General Freyberg, who was Governor General of New Zealand at the time, came up from Wellington to Wanganui (the town where Dad and his young family lived) and presented him with it at a special ceremony at the Opera House. Dad had to draw a uniform and present himself. He had been demobbed in 1947.  Dad did have the opportunity to go to London in 1945 to get his medal pinned on him by the King but he was chasing a young Italian woman (my mother) at the time and that seemed more important.  He told me that having “Tiny” Freyberg pin his medal on meant more to him than if he had got it from the King.  After all, Tiny knew him by name. 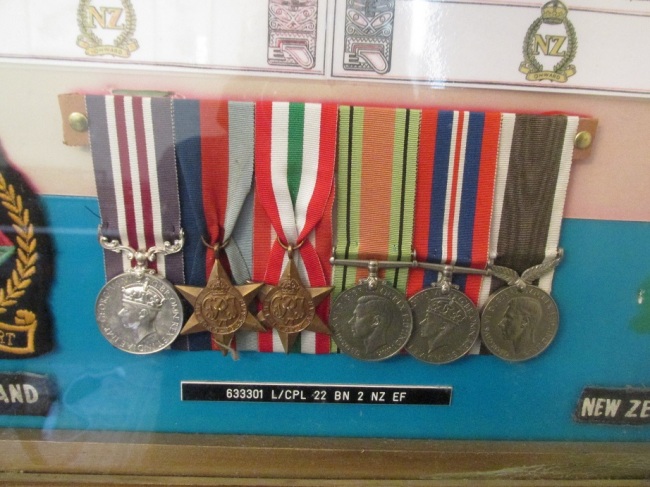 A full shot of what Dad called his Brag Board.  You will notice that bottom right there is a badge missing. That was a cap badge of his with a dent in it where a bullet nearly took his head off one day.  When Dad gave me this Brag Board before he went to live with my sister in Australia he took it with him. His good luck charm he reckoned. 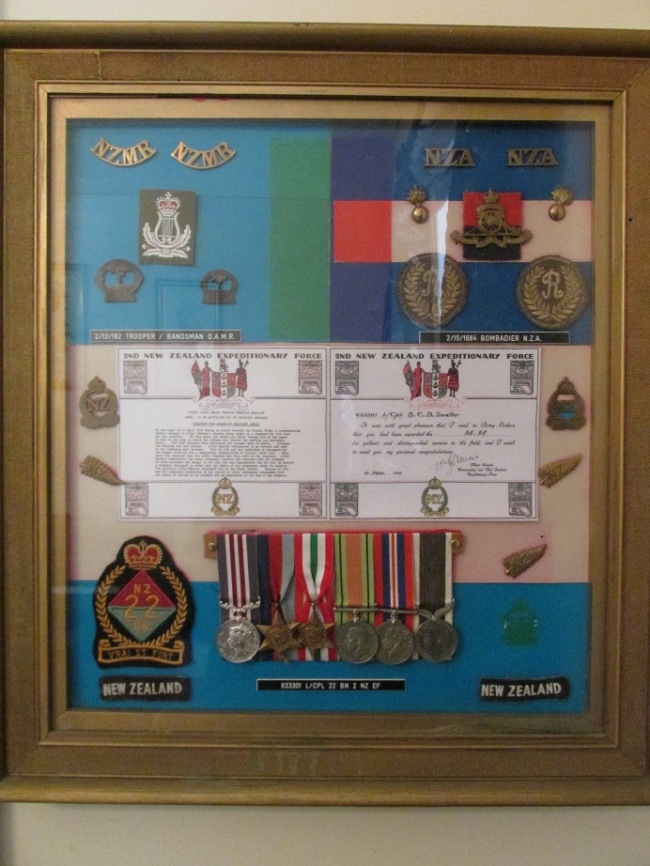 You never remember your parents as anything other than old, and sometimes it is hard to imagine they were anything else. I see that in my own kid’s eyes. But he was a young man once.

Dad in centre with Bren.