I was first introduced to the Traveller role-playing game in 1977. It has been one of my favourite role-playing games ever since. From the early days when our parties seemed to consist of nothing but psychopathic nutbars who spaced passengers and stole their belongings, to sector spanning adventures that involved lost starships and halting a Zhodani invasion fleet outflanking the Spinward Marches – I have pretty much played and GM’d all of what Traveller is capable of being – and I am still not tired of it.  However, ever since I first played the game the only thing that bugged me was the two dimensional system mapping that was used.

This is a Traveller Sub Sector Map – The Aramis Subsector from the iconic Spinward Marches region of the Official Traveller Universe.  For a larger map of the entire region see the great Zhodani Base – a treasure trove of fantastic Traveller resources. 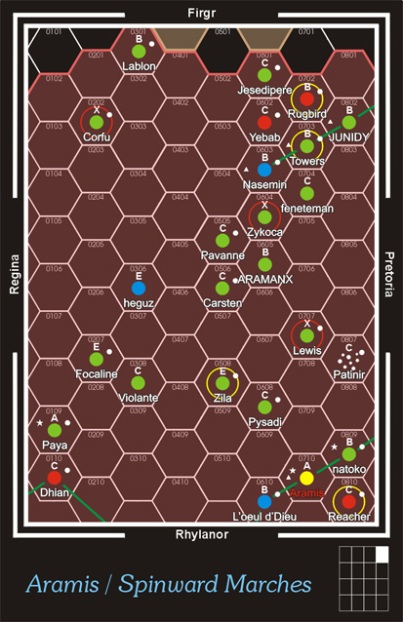 As you can see it is a two dimensional representation of a region of space encompassing an area of some 8×10 (80 square parsecs).   Interstellar travel in Traveller is done by ships equipped with Jump Drives. Each hex being a ‘Jump’.  Depending on technology levels Jump Drives can move a ship between one and six hexes (or jumps).  Conveniently, all Jumps take about a week, give or take. Now, it nowhere specifies that the distance between two systems one hex apart is exactly one parsec so the standard 2D map can be viewed as a type of interstellar railway system map.

Now after many years of playing Traveller I have a heap of starship deck plans and designs already made – using the Classic Traveller module Book Five: High Guard.  I didn’t want them all to go to waste.  I have decided for my next Traveller game to use a three dimensional Jump map. I have played with this before and tried stacking hex maps  but it is ugly and all those hexes do my head in. I have gone for a Sub Sector (or Sector) of 10x10x10 Parsecs (give or take a few). 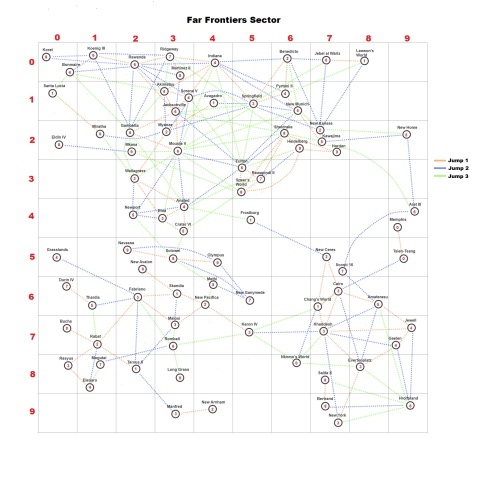 On this 2D map the systems are located by their positions in three dimensions.  For example, the Koenig III System is located at 1-0-6 (6 being the the third dimension).  I have marked Jump Routes up to J3 (although not all of them) to save time later but to work out the distance in parsecs to any other system, all you need to do is a bit of really basic math.  For example, the navigator of a starship wants to plot a course from Koenig III (1-0-6) to Gambetta (2-2-6).

You just need to us this formula:

For the example above:

Now using this system I am making the arbitrary assumption that a ship with Jump 1 engines will go up to 1.999 parscecs, with Jump 2 engines 2-2.999 parsecs and so forth.

Leave a Reply to Tom B Cancel reply