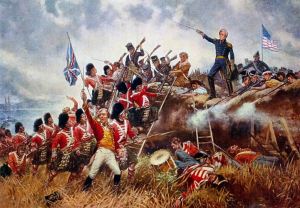 I watch a lot of music videos and I have to say that I have found the gayest one with a military theme ever.  This is the classic Johnny Horton song – The Battle of New Orleans.  There is not much I can say about this other than…enjoy. Anyone out there making Brits and US troops like these?  If there are, please stop. Immediately.

If you want to watch the classic movie “The Buccaneer”  starring Yul Brynner as Jean Lafitte and Charlton Heston as a pretty good looking Andrew Jackson – there is a link at the bottom of this post.

This is a version that will be totally unknown to anyone outside of New Zealand I imagine.  It harkens to the Land Wars in the Waikato – sort of – maybe.  The Howard Morrison Quartet were a Maori stage act greatly loved here in New Zealand.  Sad to say that half their stuff would be considered too un-PC now I suspect.

As usual I like to find some appropriate miniatures to accompany my music posts. I seriously doubt I could ever find anything as outrageous as the uniforms in the video though.  Here are my three favourite War of 1812 ranges. All good and all compatible with each other.

Old Glory War of 1812.  A fantastic range covering both sides of the conflict. My favourites are the Kentucky Volunteers and the Glengarry Light Infantry skirmishing.  I have a stack of these and will get them on the blog at some stage in the near future.

Knuckleduster War of 1812.  I have to admit that while I have lots of Forrest’s Cowboys, I have not got any of these so can only comment on what I can see in his catalogue. What I see is a fantastic and extensive range. Forrest’s sculpting has got better and better and he has a style of his own that I really like. These are on my radar.

Brigade Games War of 1812. A new(ish) range. I have already brought Brigade Games Napoleonic Spanish guerillas and I loved the models. Beautiful crisp and clean castings. This War of 1812 range looks to be more of the same.