After a year of very limited painting I am slowly getting back into the groove. Last two weeks I have completed three units (two Zulu and one British – well four British if you count the sub units).

Today I am posting another Unmarried Zulu Regiment. This is uMbonambi “The Evil Omen”. It was re-constituted in 1863. It was originally formed in 1821 during the reign of Shaka.   At the time of Isandlwana the majority of it’s men would have been in their mid thirties (35-37). The regiment was present at many other battles in the Anglo-Zulu War and by the time of Ulundi may well have been reinforced with younger replacements but I seriously doubt that would have effected their fighting ability.

At Isandlwana they formed part of the Zulu Left Horn that initially engaged Col Durnford and finally swept into the British camp from the south after overrunning the right flank companies of the British line.

Figures are all Black Tree Designs. Bases are 25mm rounds inset into 90x60mm rectangular bases.  I have one more Unmarried Regiment to complete to finish the Left Horn forces.  I have gone for these big thirty six figure units for no other reason than they look cool. 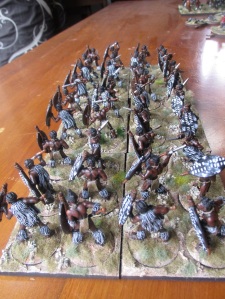