As you may or may not realise, I live on a lifestyle block. In the UK it would be called a small-holding.  This time of the year is lambing season in New Zealand. All over the country millions of lambs are being born.  Last year I was going to get rid of all my sheep and just run another couple of beef cattle.   Imagine my surprise then when all my ewes fell pregnant, especially seeing  as I didn’t have a ram.  The previous couple of years I had borrowed the neighbour’s ram to do the necessaries.  As it turns out I had one wether left that had escaped the freezer from a year or two before.  There were two left, I grabbed at one, it got away but the other one ended up as roast. The lucky survivor was lucky in more ways than one.

Turns out he was what is called a cryptorchid.  When I nutted him as a lamb, I missed a testicle. He had one left, and apparently, one is enough. So, instead of becoming food, One Nut is now the proud leader of a small flock.

So, there are three ewes, The first one had a healthy lamb and the second bore twins. 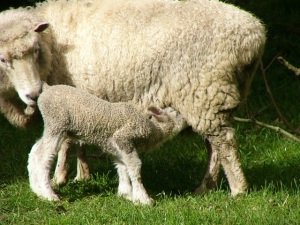 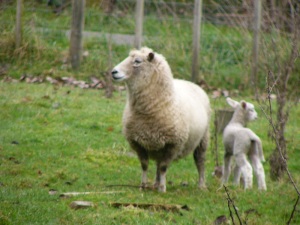 The other day I went out to check on the third girl and discovered that she had a prolapsed uterus. This happened when the pressure inside basically pushes the uterus out her vagina. The trick is to shove it back in and use one of these bearing retainers to hold everything in place. They can lamb through them which is rather nifty. You put the spoon part into the vagina and tie the thing in place so it holds her insides in.

However, by the time we got to this stage she had been distressed for some time, was exhausted  and had partially delivered a lamb. The poor girl was on her side with a lamb stuck halfway. Yanked that one out and it was alive. A bit of rubbing and it was breathing. Had to go inside her and deliver the next one.  It too was alive. At this stage the bearing retainer was inserted and we left them too it. In the morning I discovered she had lambed again. Triplets. Once she had finished lambing she rejected one lamb a few hours later and despite spending a night feeding it inside in front of the fire the lamb died. The other two were feeding vigorously so I had high hopes for them. However, in the morning one was dead. So from three am down to one from this ewe. Saying that, the survivor seems to be doing very well.

The joys of rural life.  Wins and losses.