Last year we had a ewe that had a bad prolapsed uterus. Got her through that and she had triplets.  This year it happened again but I did not get to her early enough – it was out too long and she was really a goner.  Had to kill her and do an emergency caesarian to get the lambs out. Managed to keep them alive for a while but they were probably too stressed from what Mum had been going through.  Probably for the best that she was culled because uterine prolapse is passed on and any ewe lambs she had that may have survived would more than likely have similar problems.  And if nothing had been done she would have died in the paddock.

Some people may find this pretty disgusting – I did and I was there but it is part of dealing with livestock.  Supermarkets are so much easier because you can buy your meat without a thought for the poor critter it came from. 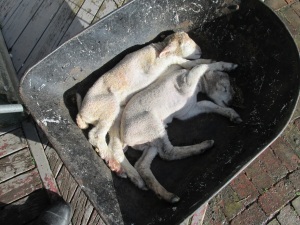 Still, waste not, want not.  It is a good thing that we like mutton.  She was skinned and dressed and hung in the cold killing shed (it got quite cold here last night so the meat had set quite nicely by this morning).  She was carrying a lot of lambing fat but still got quite a goodly amount of meat off her.  I minced most of it – except for the shanks (for slow cooking) and the leg roasts that I usually cut up for curries and stews.  Kept a lot for dog tucker as well.  All freezered.

Sheep prices have nose-dived in this region since we had the big floods in June. A lot of farmers lost a lot of grazing land to slips and have had to de-stock.  The meat works have a backlog of 700,000 sheep at the moment and are not buying – so prices are down. Two years ago a pregnant ewe was going for $200.00 or more. Lucky if they fetch $50 now. So we will pick up a few more, plus the ewe lambs we kept from last year so should have a good supply of lamb for 2016/17. 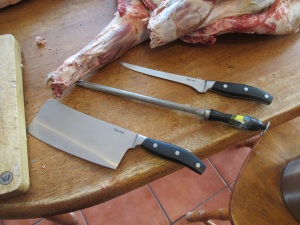 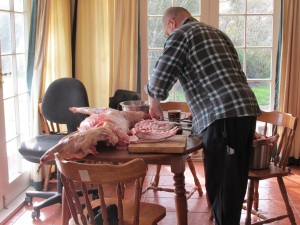 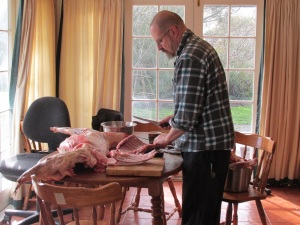 5 thoughts on “Not a good start to lambing”