I finished this British casualty vignette just now at 10pm on New Years Eve.  Started at 5pm and since then I rescued a lamb from a ditch, cooked a lamb curry (not the same lamb but one we killed two weeks back), drank half a bottle of Merlot and have made a dent in a nice Pinot Noir.  That probably is why it looks the way it does. I may need to respray in the sober light of day and do it over but at the moment I am quite happy with it, even if the photos are  crappy.  This is a Redoubt Miniatures Vignette of two British soldiers carrying a wounded comrade in a blanket. 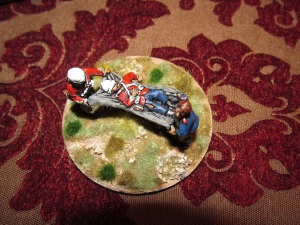 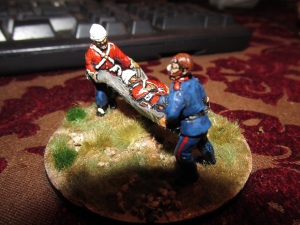