Today was spent at the Museum doing figure placement, touch up painting, painting a NZ Staff officer that Alan had just sculpted this morning and fixing broken models.  Having sculpting talent these guys tell you that your repair on the model he just broke was ‘a good job’ is rather gratifying.  Two knights visited today – Sir Peter Jackson and Sir Richard Taylor. Sir Peter had a look at the staff officer that Alan had made and I was painting and didn’t send it back to be repainted – which was good for me 🙂 I spent most of the day at a desk with my trusty portable paint box (Complete with picture of Dad for inspiration). 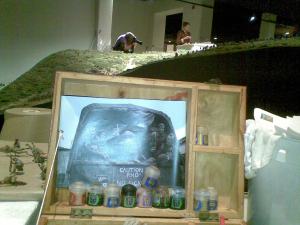 One of the most important character figures is Brigader-General Johnston – the NZ Infantry Brigade commander at Chunuk Bair. Apparently he was drunk at the time or as they put it then, was “ill”.  Alan Perry sculpted a great figure that was painted by one of the team during the week – and we lost the figure. So we have a modeled command dugout complete with tables, chairs, canvas roof, tiny maps of Gallipoli, staff officers and no commander. We searched everywhere but he just doesn’t want to be found.  Out of focus because of my crap phone camera but … Alan Perry made a new one in about half an hour.   My job is to get it painted tonight so it can be varnished and placed tomorrow – the last day before the Perrys and Co head back to the UK. 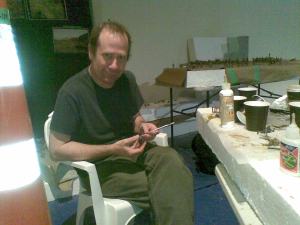 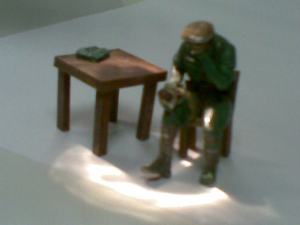 7 thoughts on “Another day closer to completion…still painting”