I am back home. Shell shocked after two days of war-gaming. We just played what I gather was the largest reenactment wargame in New Zealand gaming history. I am not sure how many figures were on the table but I heard a figure of over ten thousand and there were something like 30 players I think. The game was played with some variant Black Powder rules.  John Hutton, from Wellington, was the organiser. and frankly, people like him are either to be admired, or pitied. I am not sure which.  it was obviously a labour of love and I cannot praise his efforts highly enough.

I played General Souham, in charge of the French III Corps.  I had under my direct command three French Infantry Divisions of 6 battalions with an attached foot battery  (one division was Provisional infantry and somewhat poor in quality), two cavalry brigades – one of two Light Cavalry units and one one of 2 Light and one Dragoon Regiment. I was assigned the defence of the northern flank.  All we knew was that a large Russian force was bearing down on us and Napoleon ordered me to hold the bridges over the River Parthe.  For the first day of gaming I was pretty much unengaged as the Russians did not arrive in my sector but funneled troops into an adjacent sector.  On the second day the Russian IX Corps attacked me but I managed to defeat them and drive them off the table except for some weakened cavalry units that were bottled up by my defensive line.  I am a novice Black Powder player and everyone helped – friends and foes – to ensure that things happened as they should.

I will point out one thing. I rolled exactly 11 five times in a row for command for one of my divisions. I didn’t realise that if I had had them in March Column they could have got at least one move. In the end it was not a concern but some of the mathematical minded amongst my opponents said that it was something like 1 in 1.8 million to make that many rolls in a row. It felt like it too:)

Some other people will be blogging more photos but here are a few I took with my cell phone.

Player badges and the command map used by Napoleon (Steve Sands) to allocate reserves and move his forces.

My badge of command: Brian (Souham). 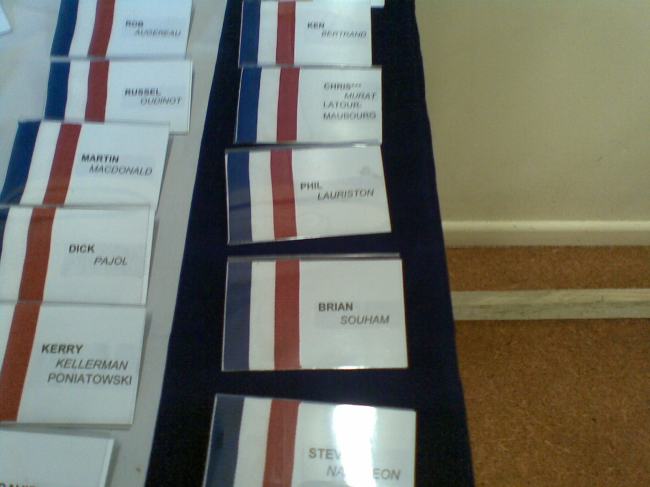 These are the Russian forces that I knew were coming my way. As it happened only a stack of cavalry and one Russian Corps came my way – Phew! 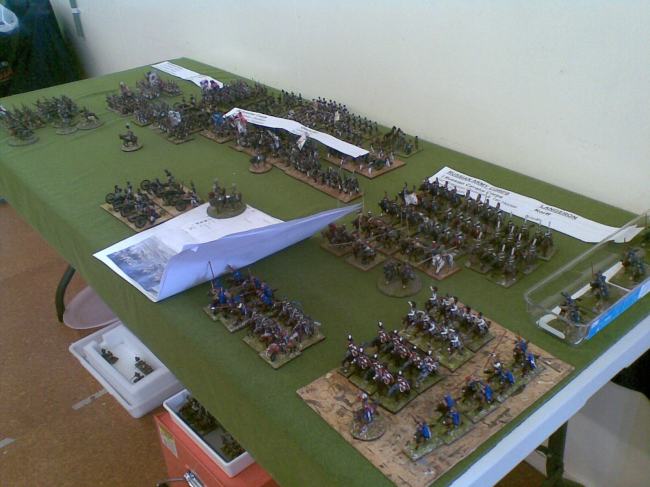 My French III Corps advancing to hold the Northern Flank.  At this stage the Russian hordes had not made their appearance.

One of several Austrian Corps advancing in the Southern Sector. 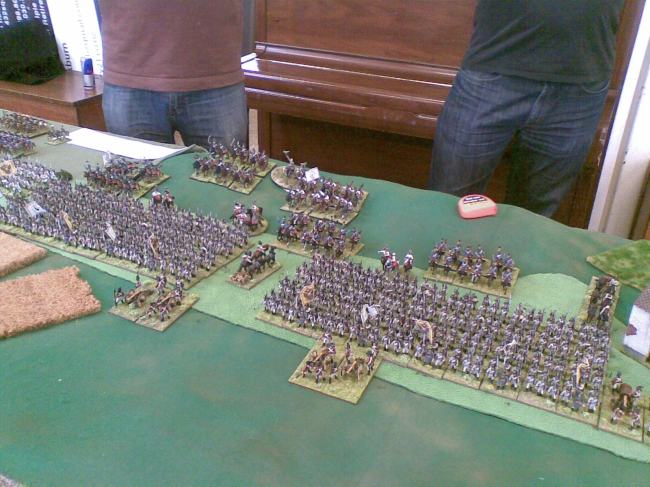 In the days ahead there will be a stack of posts on various Kiwi blogs about this game.  I suggest that you look at all of them. It was a great two days of gaming and I cannot wait until Waterloo 1815 done at 1:1 units.