This weekend I am involved in a big refight of Leipzig. I am guessing that it may well be one of the largest multiplayer Napoleonic battles held in New Zealand. There are about fifteen players on the French side alone.

The organiser, John Hutton, has put an enormous amount of work into it. Here is the table layout we are using, 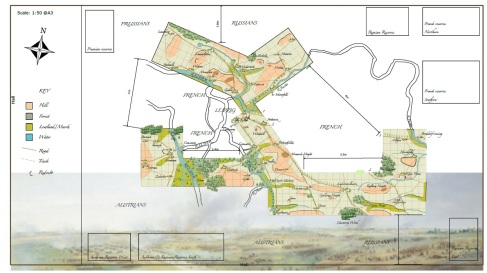 My contribution will be taking the role of French III Corps commander Joseph Souham (1760-1837).  In the actual battle he was wounded.  I am supplying about 24 battalions of French infantry, ten guns, some general figures and about seven or eight cavalry regiments. For an idea of scale from what I gather the French side alone will field 133 infantry units (24 fig), 39 cavalry units (12 fig) and 39 batteries (2 guns per).

One thing I have in common with Souham is a lack of hair. I feel a real affinity with him already.  I will update with pictures and so forth on the weekend.  Now I have to get all my models packed for the drive down to Wellington this afternoon after work.