Mick from Blaze Away Miniatures kindly sent me a few of the pre-production figures from their yet to be released Spanish Napoleonic Range.  I have ordered only once before from Blazeaway and purchased some of their Australian colonial “Bushrangers” for my Wild West Skirmish games. Off the bat I have to say that they seem good sorts to deal with and the order was processed incredibly fast.

On to the miniatures. Mick sent me three of the new range. These were two Grenadiers and a Line Infantryman (Full Dress).   These models have been photographed ‘as is” and I have not trimmed any flash or otherwise cleaned them up.  As I said, these are pre-production samples only.

The Blaze Away website says that these figures are a comparable size to Front Rank. The shot below shows the difference in size and bulk compared to Front Rank and comparable plastic figures.  When I first looked at the models my initial reaction was, these guys are huge – scale creep at work.  But I got the ruler out and measured them. The March attack figure is 29mm from the soles of his boots to his eyes. By comparison, the Perry Plastic British infantryman is almost exactly 28mm.  The Front Rank Wurtemberger is 28.5mm. The real  difference is in the heft. These guys have not stinted on the paella, let me tell you. In this respect they are very like Front Rank – well fed indeed.

The detail of these models is, on the whole, very good.  A small fault is that some of the buttons on the tunics were a little underdone. What I liked were some of the small touches. The blanket/rolled greatcoat looked like it was big enough to actually keep the guy warm – not the undersized rolled up shawl that adorns the backpacks of many miniatures (like on almost all my Connoisseur infantrymen for example). The figures all have fixed bayonets, and their bayonet sheathes were correspondingly empty.  The faces are not amazingly detailed, but I don’t paint eyes anyway so that would never be a minus to me. I liked the beard on the Grenadier. 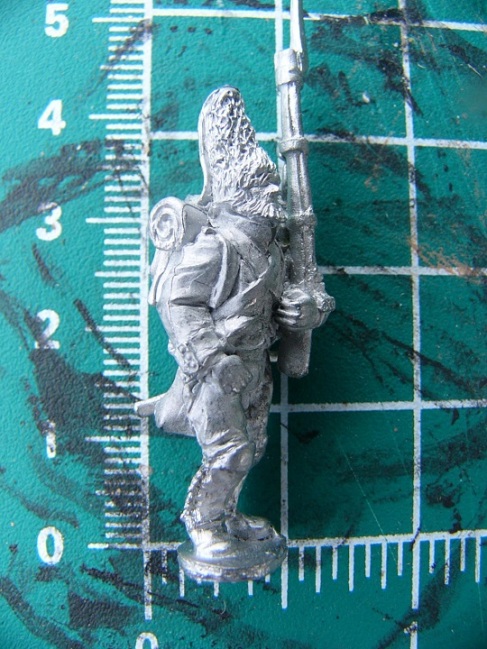 The firing line Fusilier I received is reaching back to take a cartridge from his pouch. I liked the animation in the figure and have to hope that the rest of the Firing Line set is as good. His face is very ‘Spanish’ and I rate this figure.

The Grenadier charging is not a guy I would want to see running at me if all his mates are the same size. This guy is also 29mm from boots to eyes – and he is leaning forwards. Standing up straight he would be about 30-32mm for the same measurement I suspect.

Another view of the same miniature.

I cannot comment on a full range from seeing three figures, but my initial assessment is that if these minis are representative of the entire range, it will be a good one.  The miniatures have the type of animation that I like in a Napoleonic figure. I have said it a million times, but I feel that many of the modern miniatures, whilst excellently sculpted and cast, have a sameness and stiffness to them.  The muskets and bayonets are extremely well cast. They wont bend or break easily when fumble-fingered wargamers are handling a base of these miniatures (something I fear when moving my plastic miniatures on the table top).

Mick said that these will work well with Front Rank, and I agree. I also think that they would be able to be mixed in with Elite or Connoisseur without any trouble – if not in the same unit, at least in the same army, without looking out of place.

The Blaze Away Spanish range will be a great addition to what is currently available for the Peninsula War gamer.  Now they just have to get them on the market.