I am not what you would call a great player or fan of Warhammer, but I do like some of the models. The Bretonnian Army was the least fantasy-ish and I really liked a lot of the models for this range. However, being a wargamer, and not a Games Workshop Hobbyist, I am not too fussed at where my miniatures for this army come from. I always balked at the prices that are charged for these miniatures here in New Zealand so almost all of the GW models I used have come from internet trades, mostly at a fraction of their ‘shelf price’.

The first photo is of the first unit of Men at Arms I have completed. I have another two of these. Don’t ask me why – it is just when I see twenty or thirty models on sale for $10 or so, I have to buy them.

I figure that my knights will each bring one or two men at arms with them to battle so I have a big range of liveries on their gigantic shields.

I had a whole bunch of Front Rank 100YW or War of the Roses figures so chucked them in as well. Hacked arms off, added shield, the odd head swap and gave them some humongous Games Workshop halberds. 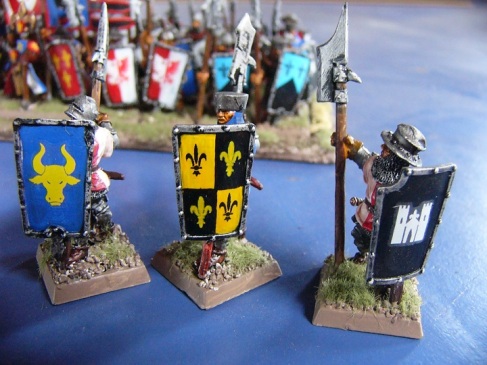 Another view of the same three figures. 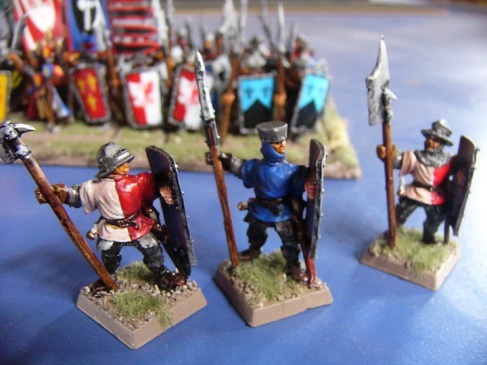 Finally a shot of some mounted Men at Arms. These are really nice little models. I picked up these ten figures for about NZ$20. A bargain considering that the same ten figures new would have set me back NZ$200. 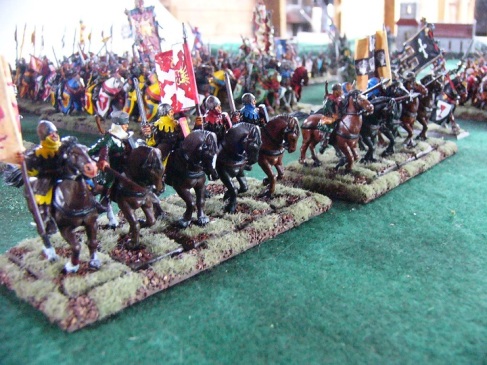 11 thoughts on “Bretonnian Men at Arms”