These Saxons will be part of my miniature 4th Cavalry Corps (1812), alongside regiments of Westphalian and Polish Cuirassiers.

One problem with the old Connoisseur line was the lack of standard bearers and musician models in the cavalry ranges.  I have converted a trooper to be a standard bearer (far left).

I have almost no freehand ability so the monograms on the pistol holster covers and the saddle cloth wont be there.  I was reasonably happy with this model, given my level of ability.

And a trumpeter who is partially completed. 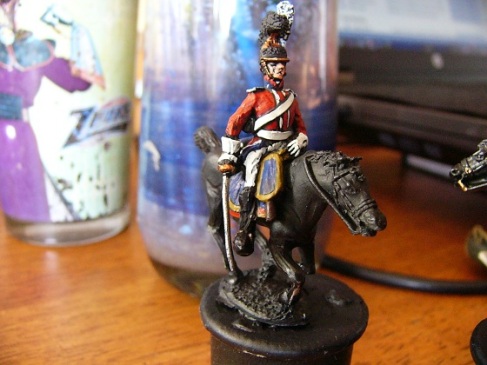 These models are quite chunky and full of mid-80s goodness – The horses are a bit small compared to the riders but I still like them.  Connoisseur miniatures are still available from Bicorne Miniatures in the UK.  I really love these old-style figures. As much as I like modern figures with their crisp mold lines and fine detail, I find they lack something in animation and personality. To me they are all much of a muchness.

Recently Eureka released a good line of Saxon heavy cavalry. They look really nice and I am tempted to get a unit to paint as the third Saxon Regiment that seems to get forgotten – the Leib Kürassiere Garde.  They have those fiddly monograms that I could never paint in a million years molded on the figure. That has to be good.