I found this Viking type figure with a slung bow and longsword in a box of random figures. The base has been filed so I have no idea of the manufacturer and there are no identifying marks.

Several helpful wargamers have told me that he is a Foundry Figure. I didn’t think old Foundry were that big. I have some old Foundry Napoleonic figures and they are like hobbits compared to modern 28s. Anyway – mystery solved. Thanks guys.

I acquired these miniatures a long time ago. So long ago I am having trouble remembering exactly when and where I got them.  I am pretty sure that I got them from the Citadel Miniatures shop in Hammersmith when I was living in London in the late 80s.

It is probably a stretch to call these 28mm – I think they are more like big 25s. They are apparently Perry sculpts made c85-87 and were released initially under the “Fighters” range. Later released as Vikings.  Apart from three of the figures that I couldn’t find you can still get them from Wargames Foundry – the figures are in sets VSN1-4.

I know the current trend is for round bases but all I had were square ones and I needed to paint while the painting itch was on me – it has been markedly absent in my life for over six months now – so rather than wait to get some rounds I went for it.  And before you tell me – yeah I know – I saw the mold lines I missed when cleaning up the figures too.

I am pretty sure I got these in individual blister packs – but so long ago I cannot be sure. Anyways, they were among the lost treasures I found when tidying my stuff up. I knew I had them – just had never got around to painting them. They are forming the basis for a Viking warband for Saga or, more probably, Columbia Game’s Battlelust – a game I enjoy a lot. 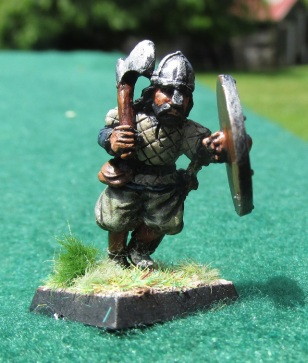 A bit of a departure this week from the fifes and drums of massed bandsmen, the strumming ukulele of George Formby or sorrowful ballads of a lost generation.  Time for some Viking Metal.  The Varangian Guard is a military force that always intrigued me. These guys from the fjords of the north who traveled all the way to Byzantium to serve as mercenaries. The stories they would have told around the fire when they were back home – the young ones would never have believed them. This music video will probably not be to everyone’s taste but I have a fondness for the group Amon Amarth. I have included the lyrics so that those who cannot make out the words can get the gist of what is going on, Much to my daughter’s disgust, I present Amon Amarth and the Varaygs of Miklagaard.  I told her if One Direction or Justin Beiber did a song like this I would showcase it as well.

Some Varangian figures in 28mm

Crusader Miniatures have a great Dark Ages range. These are Varangians in Parade Dress (Code DAB007).

Make a pack of 30 Varangians. Good value if building an army, but for skirmish gaming probably not the best. As usual, the Old Glory website does no favours to the models. Some undercoating and a wash would bring these figures to life.

Magister Militum have a range of 25/28mm Late Byzantines which includes some Varangian miniatures. This model is available in three different poses. The code is LB034 Varangian Guardsman with Axe. 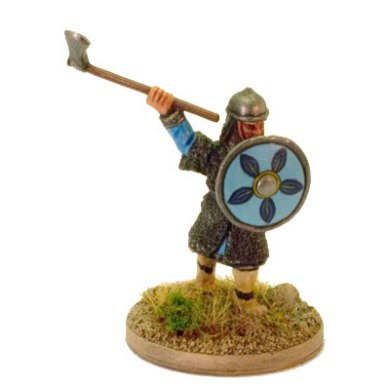 Another range I have little knowledge of. Some people swear by them and others seem to swear at them. They look quite nice and have an extensive range of Vikings, some of which could be pressed into service as Varangians.

Miklagaard has been our home, For twenty years or more

We’ve lent our axes, spears and swords, In service of the emperor

We are loyal warriors, That’s the oath we gave

To protect the emperor, Even to a violent grave

Our loyalty was always firm, We kept our given word

On these southern battlefields, Our northern war cries roared

Battles have been fought, Many gave their lives

But all who died by axe and sword, Were called to hall up high

Our time here is now at end, Can’t help but reminisce

A cold spring day, so long ago, When we set out to sea

We set out from Svitjod’s shores, With dreams of fame and gold

And the work of weaving Norns, Was for us unknown

We were loyal warriors, That’s the oath we gave

To protect the emperor, Even to the grave

It’s time to take farewell, We have been resolved

From the sacred oath we gave, It’s time to go back home

Our time here is now at end, Our memories will stay

Of Miklagard, our southern home, Until the end of days

We set out from Svitjod’s shores, With honor and rewards

With honor and rewards, We return back home