Another militia battalion marches forth for my Spanish napoleonic army project.  These models are all Perry Miniatures Carlist militia infantry. I have no idea if the hats are all correct for the Napoleonic period but I have never been that hung up on that sort of thing. They look the part and will now take the field alongside their Brigade Games counterparts that I posted a few weeks back. I have one more Perry battalion to complete and that will be it for my Militia. I also have two units of guerillas to paint and then it will be on to the regular infantry.

The Battalion advancing with the colours of the Milicias Prov. de Mallorca.

Rear view. What I like about painting militia is the lack of straps, backpacks and accoutrements that regular infantry have. Hate those things.

Command Stand. All my militia battalions have spiritual help on hand in the form of an armed clergyman. The flagpole finial and tassel are from a Warlords Games Russian infantry box set I have acquired at a Bring and Buy.I thought the officer’s blanket came out quite well.

The mixture of hats, shirts, jackets – make these a great set to paint.

The other thing I like are the fact that half the chaps have their muskets shouldered on the opposite shoulder to the other half. A real motley lot – enough to make a regular grimace. 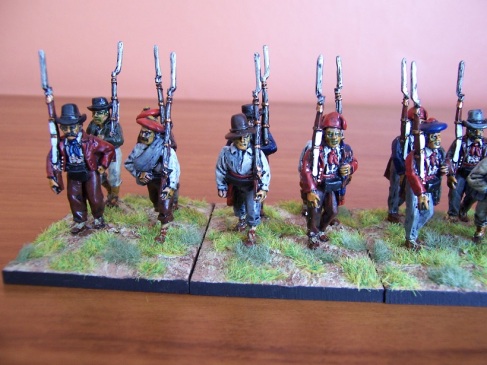 The priest tells the men that God is on their side. One hopes.

They look like they are ready for action but I have the sneaking suspicion that these Spanish infantry will flee at the first whiff of powder smoke. I guess time will tell. Their first outing is planned for three weekends from now when some friend come up to the woolshed for a weekend of eating, drinking and gaming.