Finally got these chaps finished. Brought so long ago the shop that sold them to me has been out of business for six months.  I had actually forgotten I had them until I unpacked a box of crap left untouched since we moved to the country three years ago.  It was a little like Christmas. Also found some Perry French Marshals and a pack of Senior Officers of various regiments lounging about  and a whole lot of woodland Indians I had got for a stalled War of 1812 project.  Hopefully not stalled for too much longer.

Anyways, I used to have my artillery mounted on 40mm wide bases but went with 50mm wide for this unit. I think it works a lot better. 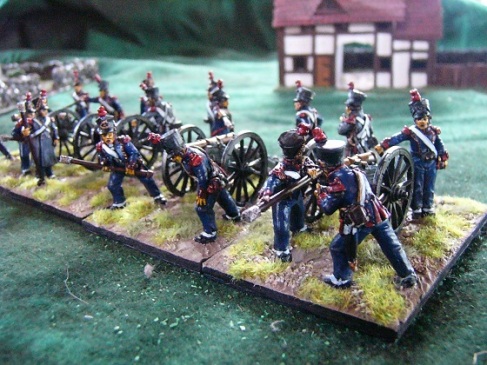 I like three to four gun batteries for Napoleonics. They look more like an artillery battery to me than a single gun model or perhaps two stuck on the table.  My next artillery project is a unit of French Guard Horse artillery.  I am going with Elite Miniatures guns (when I order them next week), Bircorne Minitaures crew and probably Hinchliffe Limbers because I have about thirty of them from a bulk lot I got about twenty years ago off a wargamer who was retiring from the hobby.